I get the question a lot; ,What is it like to work in such a male dominated industry, being a female magician/illusionist?

And even though I’ve answered that question many times before it still makes me wonder…..

Let’s start at the beginning; true, there aren’t enough female magicians, mentalists and illusionists if you ask me. Is that a bad thing? No. Would it be nice if that changed? Yes!

Don’t get me wrong; I have nothing against the stereotypical man sawing a glitter-bikini-wearing woman in half. I am the last person to comment on that since I was that girl in that glitter bikini for years. I had a great time! But is that how it necessarily should be? Is that the way? I don’t think so…. 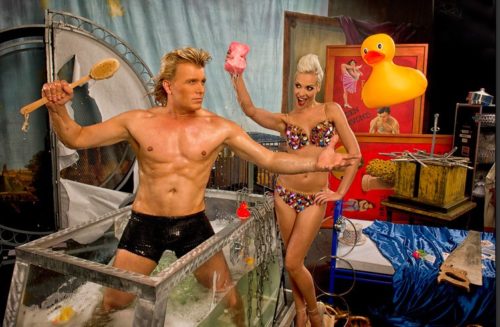 In my solo act in “Impossible” which I performed last summer in the West End, I am the one who is sawing a man in half, and that goes pretty damn well I can tell you that! It’s bizarre actually that the crowd goes that wild over the good-old “sawing in half trick”. And why? Because they never expected it. It’s the expectation +1 (a term that I learnt many years ago from the Entertainment Director of Six Flags Holland) and me being a woman, I make good use of that.

And that’s your marketing value. You’re announced as a magician, so people know what to expect. That’s the expectation, but the fact that there’s a big twist to your act in the show, whatever that may be, that’s your +1, that’s where you get your applause and your respect. 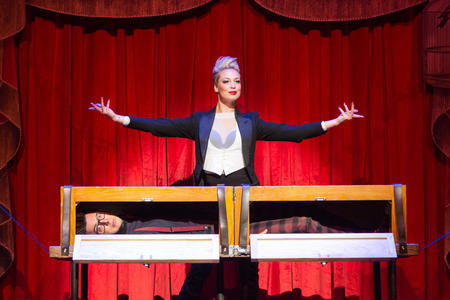 I always hope that there are women and girls in the audience that think; awesome….. That’s what I want to do when I grow up. “I want to be a magician!”, and they realise it’s possible. You don’t have to be a guy to do dangerous stunts, but you have to have balls, and that’s a whole different thing! Chicks can be fearless and a badass, we just need some feminists on the magic front.

About the guys in the entertainment industry. We have nothing to complain about, you’re all very supportive to us, it’s not your fault! I think you all would quite like it a few more women on the work floor.

Conclusion, what’s it like to work in a male dominated industry?

Nothing different than working in any other industry! But let’s face it; the time is now to change that stereotype of the magician. With an increasing number of female magicians and illusionists we’re heading the right way.

How traveling with magic items in your carry-on raises eyebrows.